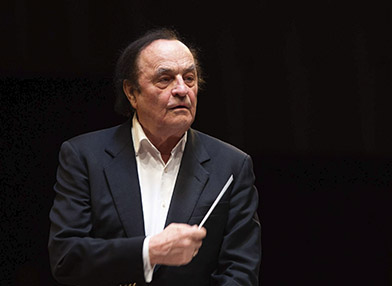 One of the most sought-after and famous conductors of our time, the winner of two Grammy awards, legendary conductor Charles Dutoit started rehearsing with the orchestra in Novosibirsk.

On April 15, at the State Concert Hall named after A.M. Kats, Novosibirsk Philharmonic Orchestra will perform a program under the direction of Charles Dutoit, in which the traditions of the Old and New Worlds are intertwined. Samuel Barber - Adagio for strings, Beethoven's Fifth Piano Concerto (soloist Denis Kozhukhin, one of the most famous pianists of his generation).

In the second part Antonín Dvořák's Ninth Symphony "From the New World» will be performed.
Last news
The season of Novosibirsk Philharmonic Orchestra ended with a triumphant gala concert with opera stars
The Orchestra of Russian folk instruments takes part in the Ural Forum of National Orchestras
The 8th Trans-Siberian Art Festival in Novosibirsk is over
Conductor Charles Dutoit, winner of two Grammy awards, will perform with Novosibirsk Philharmonic Orchestra
Photo reports