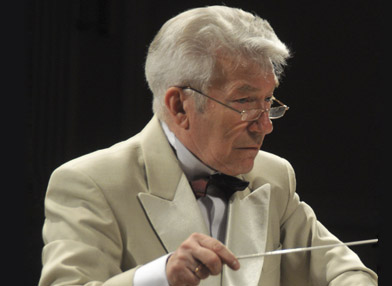 Born on 27 May 1940 in the village Chany of Novosibirsk region. In 1965 – graduated from Novosibirsk State conservatory named after M.I. Glinka: button accordion — class of A. Rybalkin and conducting – class of I. Zaydentreger.

After that he chaired a department of folk instruments at the Far Eastern Institute of arts.

1969 – 1976 – second conductor of the Orchestra of Russian folk instruments of Novosibirsk radio and television. In 1970 graduated from the assistant training of Novosibirsk State Conservatory.

Since 1976 – artistic director and principal conductor of the Orchestra of Russian folk instruments of Novosibirsk radio and television. Under Gusev’s leadership the orchestra expanded its membership, accumulated a distinctive repertoire, and was awarded the title of “academic”.

Throughout the years of work in the orchestra he combines his performing activities with teaching at Novosibirsk Conservatory: head of the Chair of folk instruments (1971-1978), Associate Professor (1980), Professor (1987). Gusev’s pupils taught in the universities of Siberia and the Far East. Many of them are associate professors, professors, and heads of orchestras.

He is a constant member of jury of regional and international musical competitions; author of numerous arrangements and transcriptions for orchestra of Russian folk instruments.

— Full Member of Peter's Academy of Arts and Sciences (since 1995)

— Person of the Year (prize of the town council of Novosibirsk, 2001)

— Laureate of the State award of Novosibirsk region (2011)