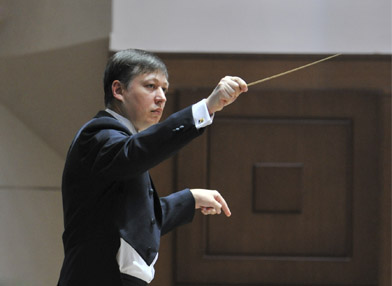 Born on 24 March, 1976 in the township «Molodezhny» of Karaganda region, Kazakhstan republic. In 2002 graduated from Novosibirsk state conservatory (Academy) named after M.I. Glinka. The same year he became a Laureate of the I prize of the interuniversity competitions of conductors of folk orchestras (Ulan-Ude).

In 2004 – postgraduate of Novosibirsk Conservatory, class of conducting with the People's Artist of Russia, Professor V. Gusev.

In 2004 – Laureate of the all-Russian conducting competition in Krasnoyarsk (III Prize).
Since 2004 – conductor of Novosibirsk philharmonic Russian academic orchestra.

Since 2007 – has been working at Novosibirsk special musical school (college) as a folk orchestra conductor. This orchestra won the competition named after Gulyaev (2008), the regional competition (Novosibirsk, 2008), became a Laureate of the all-Russian competition of orchestras and ensembles named after N. Kalinin (St. Petersburg, 2009).

As a conductor collaborated with: Symphony orchestra of Kazan state conservatory, Orchestra of Eastern-Siberian Academy of art and culture (Ulan-Ude), Krasnoyarsk philharmonic orchestra.