Russian Academic Orchestra is back from the tour 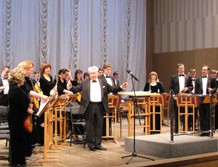 Russian Academic Orchestra toured from 21 to 27 November, 2012: two concerts in Krasnoyarsk and one concert in Irkutsk took pace. The soloist of Novosibirsk philharmonic society Ekaterina Marzoeva (mezzo-soprano) and the soloist of Novosibirsk opera and ballet theatre Sergey Kuzmin (tenor) participated in these concerts together with the orchestra.

In Krasnoyarsk the orchestra performed in the frames of the III opened international contest of conductors of russian orchestras named after A.Y. Bardin.

On 22 November the orchestra gave a recital in the Small Hall of Krasnoyarsk philharmonics. It was a two-hour sold out concert. At the first part of the concert they played music by Mozart, Piazzolla, Italian composers in arrangement for russian orchestra. The second part was devoted to music, written for an orchestra of folk instruments specially.

Popular variety hit songs and compositions of a large form as “Epic poem” by S.Vasilenko and Concert for mandolin and orchestra by E.Podgaits (performed on domra by the soloist of the orchestra, laureate of international competitions Anna Guliaeva) were included to the program. On 23 November at the Gala-concert of the conductors’ contest the orchestra performed together with Krasnoyarsk philharmonic Russian orchestra. The winners of the contest conducted the orchestra as well as the jury members including the president of the jury Vladimir Gusev.

On 25 November the concert in Irkutsk took place. The orchestra has already performed here in 2011 and Irkutsk Philharmonic society invited the orchestra again. The audience heard popular classic music, arrangements of folk songs and original compositions for the orchestra.

The highlights of the program in Krasnoyarsk and in Irkutsk were pieces of the vocal poem “Left Russia” by G. Sviridov, lyrics by S. Esenin, that was orchestrated by the conductor Rustam Dilmoukhametov and premiered by Sergey Kuzmin and Russian Academic Orchestra at the Festival “Pokrov Autumn” in October 2012.