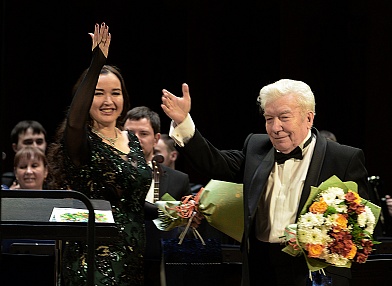 On 13 December on the stage of Arnold Kats State concert hall the Honored artist of Bashkortostan, leading soloist of “Astana Opera” Alfia Karimova.

Alfia Karimova is well known to Novosibirsk audience: in 2008-2012 she was a soloist of Novosibirsk State Academic Opera and Ballet Theater. Since then, according to the singer, she kept the warmest memories of the city and the theater. Many times Alfia Karimova performed with Novosibirsk Orchestra of Russian folk instruments: the previous concert of the soloist and collective was held in 2010.

And now the Christmas Festival gave listeners a new meeting with one of the most versatile gifted singers of the modern opera scene. In her repertoire are such classical parties as Violetta in “La Traviata” and Gigli in “Rigoletto” by Giuseppe Verdi, Donna Anna in “Don Giovanni” by Mozart and Rosina in Rossini's “Seville Barber”. With equal success Karimova sings Russian romances, arias from classical operettas, Bashkir folk songs, performs with rappers.

At the concert with Novosibirsk Orchestra of Russian folk instruments Alfia Karimova presented the program with the romances of Sergei Rakhmaninov; works on the poems of Balmont, Pushkin, Tyutchev and other poets; orchestra miniatures by Tchaikovsky and Rakhmaninov; arrangements of Russian folk song; 1 part of the concerto for voice and orchestra by Gliere; “Spanich song” by Delibes, “Juliette waltz” from Gounod’s “Romeo and Juliette”, Adele’s songs from Strauss “Bat”.